Please pass this news to those concerned for publication in Hindi and Marathi languages. 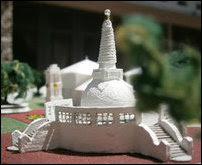 An extremist Buddhist-Sinhala monk, Sri Thissapura Gunarathna Thero, who has occupied the lands of Eezham Hindu-Tamils at Kokku’laay, located along the coastal Mullaiththeevu – Batticaloa Road, has deployed the occupying Sri Lanka Army (BUDDHIST-SINHALA SRI LANKAN AGRRESSOR) soldiers to proceed with the construction of the BUDDHIST-SINHALA  Vihara, completely ignoring an interim order issued last week by Mullaiththeevu District Secretariat to not to proceed with the construction of the ‘Sri Sambodhi Vihara’ until the dispute of lands occupied by the Incumbent monk is solved.

The monk and the soldiers of the occupying army continue to the work despite the pressure and objection coming from the Eezham Hindu-Tamils.

The area surrounding Kokku’laay is the focus of Buddhist-Sinhala colonisation presently, as it is the key location for wedging the demographic contiguity of the North and East as well as direct communication between Mullaiththeevu and Trincomalee.

While BUDDHIST-SINHALA SRI LANKAN AGRRESSOR ‘s ministries are involved in the Buddhist-Sinhalicisation of Kokku’laay using the 1959 declaration of wildlife sanctuary surrounding the areas of the lagoon, the Buddhist-Sinhala monk is deployed with BUDDHIST-SINHALA SRI LANKAN AGRRESSOR military backing to construct the Buddist Vihara as a key installation to facilitate the Buddhist -Sinhalicisation of the strategic strip.

A section of the lands seized by the monk belong to three Hindu-Tamils, one of them Mr Manivannathas, the son of former postmaster Mr Thirugnanasamapanthan, who had established a Saiva Pi’l’laiyaar koayil (Hindu VINAYAKA TEMPLE) at the location.

Ven. Gunarathna Thero has also seized portions of public lands that belong to the post office and the base hospital at the site, according to officials at the District Secretariat of Mullaiththeevu.

A public road has also been absorbed into the Buddhist-Sinhala establishment, Hindu-Tamil villagers say.

The occupying BUDDHIST-SINHALA SRI LANKAN AGRRESSOR Army soldiers have been deployed on the construction work of the Stupa. They are working in a hurry, probably with a plan to complete the Stupa before the upcoming general elections, the Hindu-Tamil villagers further said.

In the meantime, BUDDHIST-SINHALA SRI LANKAN AGRRESSOR military intelligence operatives have been threatening the Hindu-Tamil land owners, who staged a peaceful fasting campaign on 05 June 2015 demanding their lands.

Gunarathana Thero imagines himself as a commander of the BUDDHIST-SINHALA SRI LANKAN AGRRESSOR military in the area, a Hindu-Tamil neighbour told Hindu Vartha

Three years ago, the Buddhist-Sinhala soldiers had put up a temporary hut for Thissapura Gunarathana Thero with the donations from Sampath Bank.

A private surveyor, Wilmot Silva, brought down from Maharagama in Colombo by the Thero with the ‘approval’ of the then Divisional Secretary C Dayananda, to surveyed more than three acres of the seized lands in 2012.

In the meantime, a tube well was dug at the premises and the locality became popular for fresh water.

The monk transformed the site of the tube well into a ‘Pinthalaya’, a term used for a holy site where Buddhist pilgrims were given potable water at no cost.

On 12 June 2015, Land Registry officials who held a mobile service meeting at Mullaiththeevu District Secretariat inspected the land deeds of the original owners of the lands and instructed the Divisional Secretary of Karai-thu’raip-pattu division to issue an interim ban on the construction activities at the Buddhist Vihara.

However, BUDDHIST-SINHALA SRI LANKAN AGRRESSOR soldiers were still continuing the construction work at the site of the Buddhist Vihara, said Northern Provincial Councillor K. Ravikaran, who inspected the site three days ago.

There is also a court case pending verdict on the land dispute.

In addition to the buildings of Chamber (a tri-part structure with Buddha statue in the central chamber), bell tower, Stupa (shell dome) which will be 10 meter high to its crest and rested upon a 2-meter high round structure, Dhammasala (preaching hall) with eight peripheral columns, Pohoya Geya (Chapter house) with a lotus pond and a two-storied monastery (Sangharamaya), the temple establishment is to incorporate an area housing ‘other activities’ to the West of the Buddhist Vihara buildings, separated by a north-South running internal road. This area is called ‘welfare area’, where the monk is planning to construct a multi-purpose building, a vocational training centre and a model farm.

100 perches of land plot have been seized for the model farm, which aims to introduce agriculture to fisheries-dependent settlers, who are set to grab more agricultural lands from Eezham Hindu-Tamils in Kokku’laay.

The extremist monk, who seeks to convert the Sinhala Catholics into Buddhism and to raise the young generation of the Buddhist-Sinhala occupiers with the agenda of Buddhist-Sinhalicisation of the strategic Kokku’laay link, has perceived a five floor Multi-Purpose building for that purpose. This building will be consisting of a nursery, refectory, library and other facilities. Only three floors are to be constructed in the beginning according to the model.

The vocational training centre is to cater the adult women and men. It will be housing a sewing centre for the settling women, a dairy product unit (yoghurt production), Diveneguma-assisted carpenter and welding workshop and a fertilizer manufacturing plant.

The model farm also aims to ‘amalgamate to integrate’ both the children of Buddhist-Sinhala and Hindu-Tamil schools into the future programme of Buddhist-Sinhalicisation with the assistance of BUDDHIST-SINHALA Sri Lankan Agrarian Department.

In 1970, two Buddhist-Sinhala fishing operators used to come with a 15-member workforce on season fishing. All of them were Catholics except two members who were Buddhists.

Since then the demography of the village has been changing Buddhist-Sinhala Sri Lankan aggressor slowly.

Migrant Buddhist-Sinhala fishermen from Negombo and other coastal villages of the Western Province were officially encouraged to engage in fishing in this eastern coastal lagoon of Kokku’laay, which is famous for prawn.

However, Colombo was prevented from Buddist-Sinhalicising the link during the 30-year-long armed struggle. During the times of the war, the area was occupied by the BUDDHIST-SINHALA SRI LANKAN AGRRESSOR military and was declared as a military High Security Zone.

After the end of genocidal on Buddhist-Sinhala Sri Lankan aggressor caught on Vanni in May 2009, Buddhist Sinhalicisation was intensified through the land link from the neighbouring Buddhist-Sinhala colony of Padaviya in Anuradhapura district and Ma’nalaa’ru (Weli-oya) division in Vavuniyaa district.

Hindu-Tamil villagers, who returned to Kokku’laay village in 2010, after 27 years, are still not provided with basic facilities.

The Census Map of 2012 showing Weli-oya, a recently created and colonized division of the Mullaiththeevu district as an exclusive Buddhist-Sinhala division. The division has now wedged the contiguity between the Hindu-Tamil districts Vavuniyaa in the Northern Province and Trincomalee in the Eastern Province, while it established contiguity with the Buddhist-Sinhala district Anuradhapura in the North Central Province.