Arianespace’s Ariane 5 rocket launches with NASA’s James Webb Space Telescope onboard, Saturday, Dec. 25, 2021, from the ELA-3 Launch Zone of Europe’s Spaceport at the Guiana Space Centre in Kourou, French Guiana. The James Webb Space Telescope (sometimes called JWST or Webb) is a large infrared telescope with a 21.3 foot (6.5 meter) primary mirror. The observatory will study every phase of cosmic history—from within our solar system to the most distant observable galaxies in the early universe. 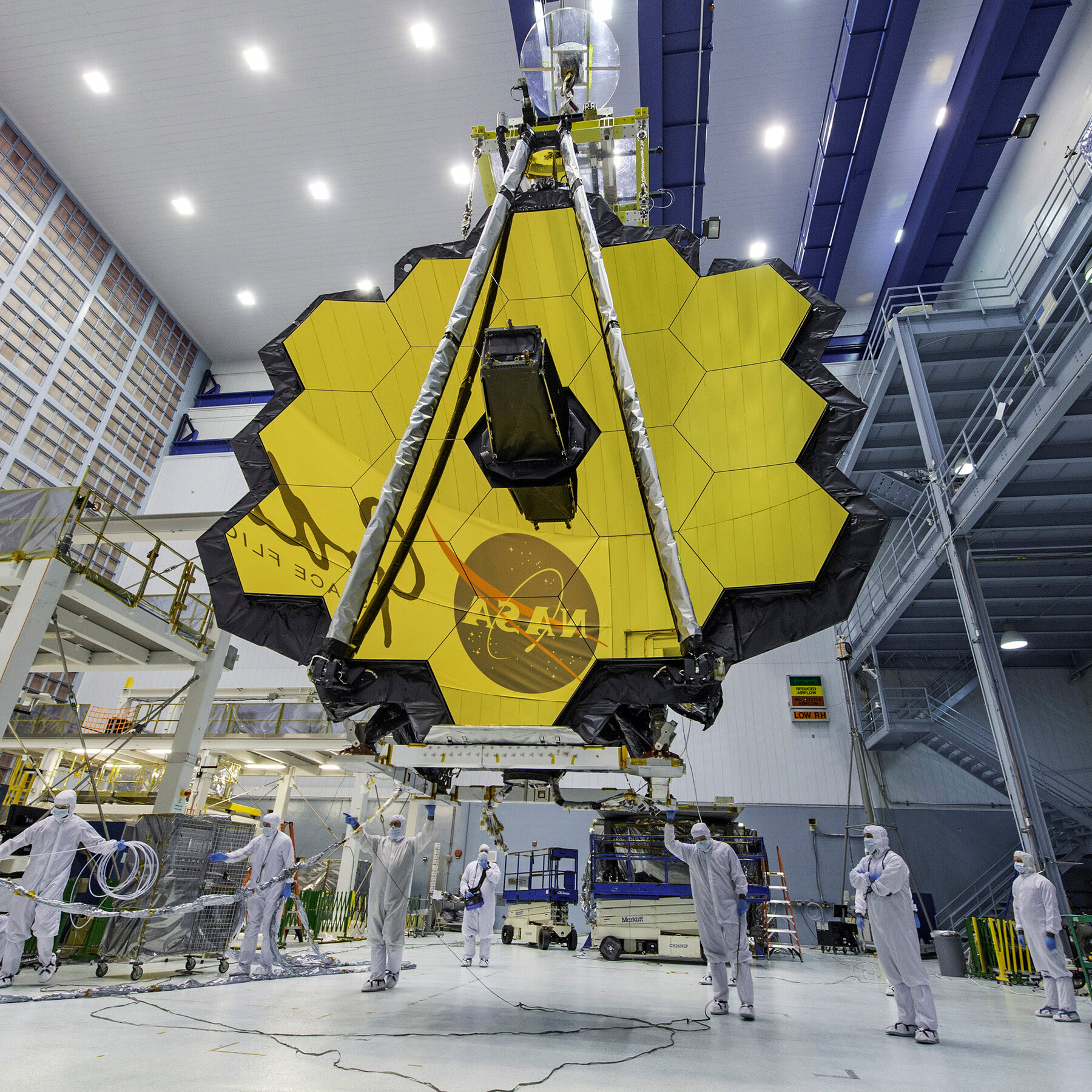 The James Webb Space Telescope is a space telescope developed by NASA with contributions from the European Space Agency, and the Canadian Space Agency. The telescope is named after James E. Webb, who was the administrator of NASA from 1961 to 1968 and played an integral role in the Apollo program. 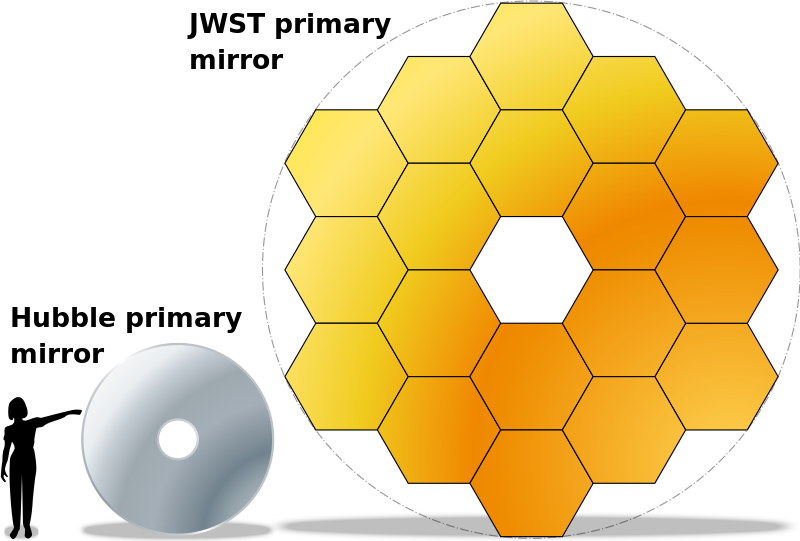 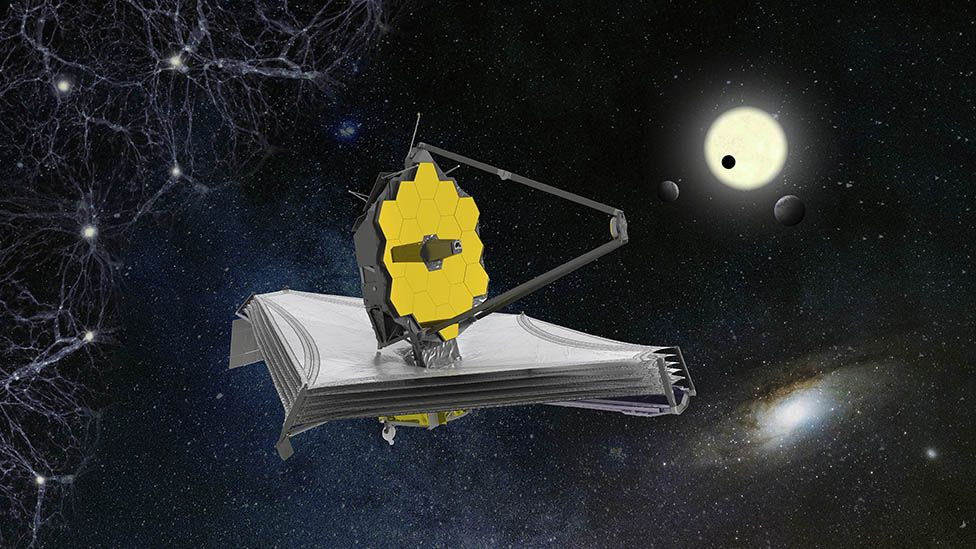 An artist’s view of the James Webb Space Telescope

On Thursday, November 17, 2011, the House and Congress came to an agreement for the fiscal year 2012 budget that includes funding for NASA and approves the full requested funding for the James Webb Space Telescope (JWST), the successor to the magnificent Hubble Space Telescope. The Webb, which came under fire in July 2011 when the House proposed cutting its funding entirely, will receive $529.6 million, the amount required for it to stay on track for its planned 2018 launch.

Here are five cool things – which you might not know – about the JWST project.

1. The James Webb will unfold in space. It’s being launched on an Ariane 5 rocket, provided by the European Space Agency (ESA). But because of its massive size — it’s as big as a tennis court and about 40 feet (12 meters) high — it must be folded up for the trip. Many features of the telescope, such as the hexagonal shape of the mirrors, were designed to enable the unfolding process. Check out the video below for a glimpse of how Webb’s unfolding will take place.

Webb will orbit at the Second Lagrangian Point. Credit: NASA
It’s being sent to what’s known as the L2 – the second Lagrangian point in the Earth/sun system. The Lagrangian points are named for Joseph Louis Lagrange, who realized that there would be stable or semi-stable points in the vicinity of every two orbiting bodies in space. In other words, every time you have two orbiting bodies, you also get five Lagrangian points. At these points, a third body can maintain a relatively stable orbit without the heavy usage of thrusters and propellants. In this case, the sun and Earth are the two bodies in space. The Webb Telescope will orbit the L2 point in the Earth/sun system, which means it will follow Earth around the sun, always in a straight line with the Earth and sun. Its orbit will be far from Earth – beyond the moon’s orbit. For comparison, the Hubble Space Telescope is 380 miles away in low Earth orbit.

3. The Webb Telescope’s 18 mirrors are coated in a thin layer of 24-karat gold. Webb’s purpose is to read infrared light, the wavelength of light that is emitted by the farthest objects in the universe. Gold reflects red light better than other materials, making the mirror 98 percent reflective, rather than the 85 percent achieved by ordinary mirrors.

Webb
4. The Webb Telescope’s science instruments will operate at temperatures near absolute zero, the theoretical temperature at which all molecular and atomic motion ceases.

Webb
Everything that exists emits infrared radiation, which is produced from the vibration of atoms. The colder something is, the less infrared it emits. Because Webb is designed to work in the infrared, but emits infrared itself, it must be kept as cold as possible to keep its interference with itself at a minimum. Webb’s massive sunshield divides the telescope into a hot side, with temperatures around 185 degrees F, and a cold side, around -388 degrees F, or 40 Kelvin. In contrast, the coldest temperature ever recorded on Earth was -129 degrees F.

5. Planning for the Webb telescope began in 1995. Just five years after Hubble launched, scientists at the Space Telescope Science Institute (STScI) in Baltimore, Md., first envisioned what its successor would look like, knowing it would take many years to bring this vision to fruition. Now the Webb is scheduled to be launched in 2018, and it’s a safe bet that astronomers soon will begin imagining an instrument to extend our vision with a telescope even grander and more powerful than the Webb.

For more information about the ‘scope and its science, visit its web site, or check out STScI on Facebook.